The Number of Homes Under HOAs Rises Steadily Over Last Decade † 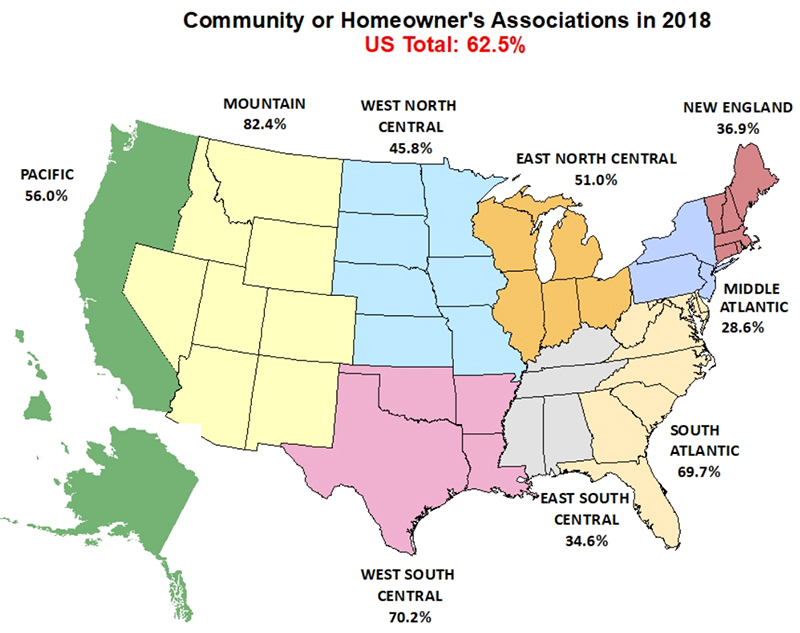 Nearly 63% of homes that broke ground in 2018 were built under a community authority such as a homeowners association, up from 47.6% in 2009, according to U.S. Census Bureau data. HOAs are entities that oversee the maintenance of common areas in a neighborhood. Membership is mandatory for homeowners who live within an association’s jurisdiction.

The highest share of HOAs in the U.S. is in the Mountain region, which includes states like Colorado, Nebraska, and Montana. Eighty-two percent of new homes in this region fell under an HOA. HOAs are less common in the Middle Atlantic region, which includes New York and Pennsylvania. That region had the fewest number of new homes in a community association, at 28.6%.

According to data from the Census Bureau’s Survey of Construction (SOC), 62.5 percent of all homes started in 2018 were built within a community or homeowner’s association. A total of 543,000 homes with community associations were started in 2018, compared to 508,000 in 2017. The Census Bureau defines community or homeowner’s associations as “formal legal entities created to maintain common areas of a development and to enforce private deed restrictions; these organizations are usually created when the development is built, and membership is mandatory.”

Copyright © 2019, John McClintock
Information is deemed reliable though not guaranteed.
† Each Keller Williams office is independently owned and operated.