For the first time on record, fewer than 10% of Americans moved in a year †

For the first time since the Census Bureau began recording annual migration statistics, fewer than 10% of Americans changed residence in a single year, according to just-released data for 2018-19. The new all-time low of 9.8% occurred on the heels of a year when the nation’s total population growth fell to an 80-year nadir, with only a modest increase in its foreign-born population—signaling a general stagnation of the nation’s demographic dynamics. Together, these data run counter to economic trends reflecting an increasingly robust national economy a decade after the Great Recession. 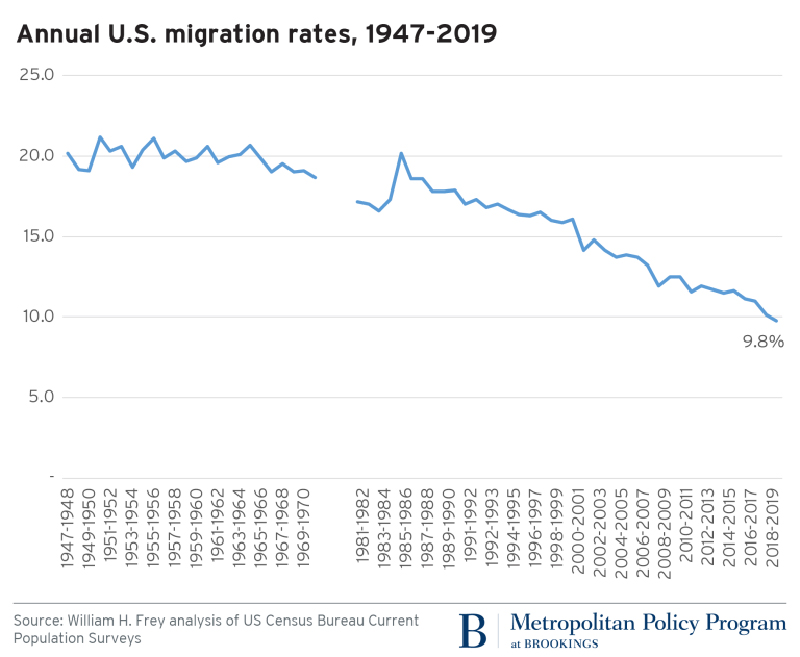 Overall, the nation’s mobility is far less robust than it was even in the pre-recession era, and much less dynamic than in the 1990s or earlier. It is possible that the Great Recession and its impact on the housing market accentuated and extended the mobility decline of the millennial generation and, subsequently, of the nation. If that was the case, then mobility might rise somewhat for millennials and their Gen Z counterparts as the economy continues to prosper. Yet even so, these downward migration trends suggest a future of somewhat less demographic dynamism, cutting off people and places from broader economic changes and opportunities nationwide.